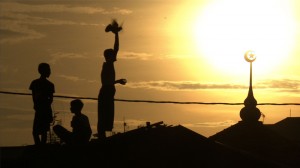 This documentary began as an idea on the part of writer/producer/director Ben Moses to bring the incredible work of democracy advocate and expert Larry Diamond into the public eye.    Moses was deeply impressed with Diamond’s moving book, “The Spirit of Democracy,” and sought a way to dramatize the ideas it and Diamond’s other work presented.  Diamond was supportive of the idea, and introduced Moses to his former student and distinguished democracy advocate in his own right, Prince Moulay Hicham ben Abdallah of Morocco.   Together, the three decided to launch a documentary film project.   Moses and his production company, Appleseed Entertainment, would develop the film, Larry Diamond would serve as Executive Producer and head advisor and Moulay Hicham would provide development funding and a commitment to participate in any way he could best support the project.

In the summer of 2008, Diamond invited Moses to attend Stanford’s Center for Democracy, Development and the Rule of Law’s annual Draper Hills Summer Fellowship on Democracy and Development Program, where democracy activists around the world gather to received training and support for their work.  There, Moses was able to meet and film brief interviews with many fascinating activists.  This footage was soon edited into a promotional video to help raise funds for the full-length documentary.

However, the economic crisis that arose in 2008 made fundraising difficult, and ultimately Moulay Hicham committed to making sure the important work of the film went on, with or without outside funding.    With financing secured by the Prince, filming began at the 2009 Draper Hills summer program.  Producer Amy Martinez and Line Producer Christopher Pavlick were hired in early 2010, and Lynne Moses, Moses’ partner in Appleseed Entertainment, joined the team as an Executive Producer.

Under Diamond’s guidance, five countries were chosen as the primary subjects of the film:  Egypt, Malaysia, Ukraine, Venezuela and Zimbabwe.   Given that the target audience included many people in non-Western countries, it was determined that the message would be best received if the exploration of democracy did not include the U.S. or other Western democracies.  The core message of the work is that the thirst for freedom and accountable government is universal and that democracy is not just a Western concept.

Along the way, it was determined that Moulay Hicham himself should interview the various heads of state interviewed for the film, when possible.  As a result, the filmmakers have a treasure trove of interviews conducted by the Prince, some of which have been included in the documentary.  As time did not allow for full exploitation of this rich material, a separate project is being developed around those interviews.

After the filmmakers’ “last” filming trip in November 2010, where they covered the rigged parliamentary elections in Egypt, editing began in earnest – and the Arab Spring broke out.  A return trip to Egypt in April 2011 was scheduled, as well as a return to Malaysia to interview former Prime Minister Mahthir Mohamad.

Editing proved to be an enormous undertaking, whittling down enormous amounts of fantastic material on five countries into one, 94 minute film.   The Herculean task was finally completed in July 2012. 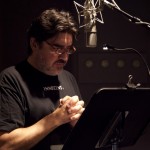 Alfred Molina is a British-American actor. He first came to public attention in the UK for his supporting role in the 1987 film Prick Up Your Ears.  He is well known for his roles in Raiders of the Lost Ark, The Man Who Knew Too Little, Spider-Man 2, Maverick, Species, Not Without My Daughter, Chocolat, Frida, Steamboy, The Hoax, Prince of Persia: The Sands of Time, The Da Vinci Code, Little Traitor, An Education and The Sorcerer’s Apprentice. He has recently starred as Detective Ricardo Morales on the NBC police/courtroom drama Law & Order: LA and as Roger opposite Dawn French in the BBC television sitcom Roger & Val Have Just Got In.

Leveraging her dynamic and thorough understanding of government from the inside out, Kim Campbell speaks on major issues of the day, particularly those related to leadership in the political as well as business arenas.  Her leadership role in several global organizations has led her to develop an expertise informed by real time exposure to populations in democratic transition, economic crisis and gender imbalances.  For example: From 2004 until 2006 Ms. Campbell served as Secretary General of the Club of Madrid, an organization of former heads of government and state who work to promote democratization through peer relations with leaders of transitional democracies.  Ms. Campbell is a founding member and additionally has served as its Acting President in 2002 and Vice President 2003-2004 and sat on the Board of Directors from 2007-2011.

Kim Campbell served as Chair of the Council of Women World Leaders (CWWL) from 1999-2003.  The Council’s membership consists of women who hold or have held the office of President or Prime Minister in their own country.

She also serves on advisory boards of numerous other international organizations such as the Arab Democracy Foundation, which launched in Doha in May of 2007, the Forum of Federations, the Middle Powers Initiative, and the Asia Society New York.  She is a member of the Pacific Council on International Policy, (the West Coast affiliate of the Council on Foreign Relations), the Board of the Forum of Federations and serves on the advisory board for Glendon College at York University.  Ms. Campbell’s corporate director experience includes the high tech, bio-tech and medical devices industries and she is a consultant on issues related to democratization and leadership.

Kim Campbell was educated at the University of British Columbia (BA, 1969, LLB, 1983) and the London School of Economics (Doctoral studies in Soviet Government, ABD, 1970-73) where she’s an Honorary Fellow.  She holds several honorary degrees.  The 3rd Edition of her best-selling political memoir Time and Chance was released in May of 2008 with an updated epilogue by the University of Alberta.