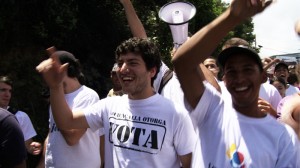 Buy the DVD Virgil Films (use discount code “4WHISPER” at checkout) or on Amazon.

Several organizations around the world have copies of the film available to host screenings in their local language. For more information about hosting a screening in your country, please contact the organizations below.

On January 29, 2013, the U.S. Department of State’s Open Forum and Tomicah Tillemann, the Senior Advisor to the Secretary for Civil Society and Emerging Democracies, hosted a screening of A Whisper to a Roar in the State Department’s Dean Acheson Auditorium.  The hosts worked in collaboration with over 25 US Embassies and Consulates around the world to host viewing parties with civil society leaders in their respective countries.  Those screenings continue to be held at Embassies, Consulates and civil society organizations around the world.

The panel discussion hosted by Tomicah Tillemann on January 29th at the State Department with the film’s inspiration and Executive Producer, Larry Diamond of Stanford University; the film’s writer/producer/director Ben Moses; and the film’s Esraa Abdel Fatel and Roberto Patiño is available for viewing on YouTube.

Tuesday, November 19th, 5pm
In collaboration with the Association for the Support of Socio-Cultural Initiatives.
Polish subtitles.

Monday, October 14th, 6pm
Hosted by the Education for Democracy Foundation & the Borussia Foundation.
The film will be screened with Polish subtitles.

Wednesday, September 11th
The Permanent Secretariat of the Community of Democracies  will the screen the film with English subtitles.August 2013

Wednesday, August 7th
The Caucasus Institute for Peace, Democracy and Development
Screening with Russian subtitles, and is being shown as part of their summer school program for undergraduate students.

Thursday, May 9th – 5:30 pm
The University of Gothenburg
Hosted by The Society of International Affairs Gothenburg

Tuesday, March 5
Young Professionals in Foreign Policy through the US Mission to EU

Dec. 14-16
Prishtina Youth Summit
Prishtina Youth Summit will be organized in the period December 14-16, 2012 and it gathers 150 socially and politically active young individuals from the countries of the Western Balkans, the European Union and the (post) conflict areas throughout the World, as well as representatives of state institutions in the region. Youth Initiative for Human Rights organizes the Summit.

Fri, Nov 15 – 7:30 pm
Followed by Q&A with Filmmaker Ben Moses via Skype
Amnesty International Reel Awareness Film Festival
“A Whisper to a Roar” opens this festival devoted to “the best human rights documentaries and feature films shown around the world.”

“The Club de Madrid is an independent non-profit organization composed of more than 80 democratic former Presidents and Prime Ministers from 56 different countries, constituting the world´s largest forum of former Heads of State and Government, who have come together to respond to a growing demand for support among leaders in two key areas: democratic leadership and governance;  and  response  to crisis and post-crisis situations.”

Fundación Transición Española (The Spanish Transition Foundation) was constituted in February 2007 by a wide group of people, many of which participated directly in the transitional process towards democracy in Spain, as members of parliament, ministers and high ranking members of the administration.

Mon, Nov 12 – 7:00 pm
Stanford University
Cubberley Auditorium (CUBAUD)
Hosted by the Center on Democracy, Development and the Rule of Law
Screening and Q&A with the film’s inspiration and Executive Producer, Larry Diamond, and the film’s Roberto Patiño of Venezuela to follow.

Tuesday, June 5, 2012
Excerpt screened at “Democracy in the World After Thirty Years” conference at the Ronald Reagan Library as part of a presentation by Larry Diamond.  Conference marked the 30th anniversary of President Reagan’s Westminster Address and was sponsored by The National Endowment for Democracy, the Ronald Reagan Presidential Foundation and Library, and the Pacific Council for International Policy.  It featured former Secretaries of State George P. Shultz and Madeleine K. Albright.